If you’ve never read one of Connie Voisine’s poems, you may be pleasantly surprised by the elegance and beauty in her imagery. We were pleased to find just such beauty in something seemingly industrial and plain in her poem, “Medical Plaza,” featured on page 191 of AJ 2013. 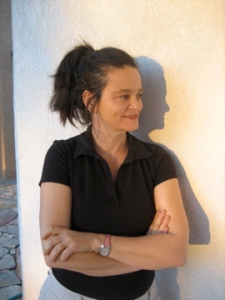 Connie Voisine is an associate professor of English at New Mexico State University. Educated at Yale University, University of California at Irvine, and University of Utah, she also coordinates La Sociedad para las Artes, an English Department outreach organization. Her book, Cathedral of the North, was selected winner of the AWP Award in Poetry, and Rare High Meadow of Which I Might Dream was published by University of Chicago Press in 2008 and was a finalist for the Los Angeles Times Book Award. She was a Fulbright Fellow at Queen’s University, Belfast, Northern Ireland in 2012.

Here is a teaser from “Medical Plaza”:

Oh secret volume—so
this is the other,
the failing life? The truer
eye? Tests and brown-tiered

Following the poem is this dialogue with Connie:

The piece takes place literally in the quiet before the day’s rush, and metaphorically, it touches upon a more substantial, existential waiting. What fascinates you about these in-between spaces?

That’s lyric itself, isn’t it—the in-between spaces. The stopped clock. The emotion, the thinking, the psychology that pauses the busy narrative of the world …

To read the full poem and dialogue, pick up a copy of AJ 2013. You can subscribe on our website.

Like an old-timer
easy with hard luck
will roll up pantleg
and shirtsleeve
to show what
a snapped cable
or a black widow
can do,
the land here
bares its stories
about where wind
makes its rounds
on rock,
has taught ridgeline
junipers to twist;
about where water goes
by habit
and by fancy,
where water went
and changed
its mind,
where a scrub oak
wanted so bad
for water,
it lay down on
its side and
cracked granite
to have it.

This special edition of Southern Poetry Review can be found at http://www.southernpoetryreview.org/

ABOUT KEEPING EVEN: A POETRY COLLECTION BY POETRY/CREATIVE NONFICTION EDITOR, SHEILA SANDERSON 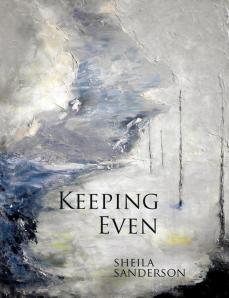 Whether the scene happens to be the wildebeest migration trail through the Serengeti, or a pond in Kentucky “growing every minute greener,” or a stand of saguaro in the low desert of Arizona, the poems in Sheila Sanderson’s Keeping Even convey a strong sense of place. Grounded “on an actual, factual, earth,” the poems in Keeping Even call attention to the various balancing acts that living requires, to the desire to define and locate the center of gravity.–Stephen F. Austin State University Press

Sanderson understands that you can’t get to the metaphysical without first experiencing and enduring the physical. She straddles the known and unknown planes of existence buoyed by a voice that’s at once ironic and sincere, in a word, genuine. Sanderson swirls her personal myth with Biblical myth to reveal the essential, but seldom revealed, truth that they’re one and the same. Muezzins and hobos exist side-by-side in Sanderson’s world . . . . Wherever we are, and whoever we’re with, she reminds us-no, convinces us-that “the closing argument is faith.” –Alexander Long, author of Light Here, Light There and Still Life.

Sheila Sanderson writes a mature and committed poetry–a poetry that cuts to the bone, a poetry committed to cherishing the elemental wonders surrounding her life. Sanderson pays close attention to nature and her appreciation is specific, fresh, and hard-won, for Sanderson is a poet who, through hands-on observation, realizes the ironies and inequities of experience. And so her vision is subtle, wry, and realistic. The experience of a Sanderson poem is always essential. Her voice is uniquely her own, and a reader will hear Biblical overlays at the edges, in her poetry’s fierce music, in its gravity and concern. Sanderson commands a consistent and sophisticated syntax, and her voice, her style, support and include the contradictions of hope–which is where her poems brilliantly lead.–Christopher Buckley, author of Varieties of Religious Experience, Rolling the Bones, Modern History, Star Apocrypha and others.

Keeping Even is a brilliant book. Written in a wondrous blend of the vernacular and the philosophical, the poems . . .glow with radiance and wit . . . . Sanderson beautifully meditates on the epiphanies of travel, the knotty loyalties of family and home, the bewilderment of grief, and the complex gratitude for being “temporarily employed by the species.”–K. L. Cook, author of Love Songs for the Quarantined and Last Call

Keeping Even is available at Stephen F. Austin University Press, Texas A & M Consortium Catalog, and Amazon.com. It is also available locally at the Prescott College and Peregrine Bookstores.

SHEILA SANDERSON lives in the high desert mountains of Prescott, Arizona and teaches writing and literature in the Arts & Letters Program at Prescott College. She serves as poetry and creative nonfiction editor for Alligator Juniper. Her work has also appeared in journals such as Alaska Quarterly Review, Crazyhorse, Miramar, Southern Poetry Review, and Spillway.

It is such a pleasure to have our state and our authors recognized. Please tell us below what you love most about Arizona or the Southwest!

In an Underground Bunker

Long it seemed to the mechanic

that they had settled on prayer;

but finally the words and their implications loosened,

subsiding into the noise of the buzzing generator.

the world was ablaze up there.

A red-eyed cousin rose to offer a fractured reflection

of the past week, of the horror, and the generator rumbled on,

that the mechanic hardly understood anymore.

The land, the country!

In a war waged on brothers,

families tore themselves from the throng

to find comfort in the removed dream underground.

Posted: April 18, 2013 | Author: alligatorjuniper | Filed under: NaPoWriMo, Poetry, Uncategorized, Writing | Tags: Cereal, NaPoWriMo, Poetry, Writing | Leave a comment
The corn was grown in a plot of land somewhere
To the exclusion of all other life that might have been there
fertilized with imported nitrates, modified genetically
sprayed with synthesized toxins to keep other life away
Harvested, processed in a factory with great energy
petroleum, trees, coal, minerals, pigment consumed
All so that one could have
a box of Cookie Crisp
.
.
-Blake Fisher

Like our ancestors
We were once nomadic.
We lived off Wonderbread, sunflower seeds and cigarettes.
Nights sleeping in parking lots
when the moon looked
fuller in the light polluted sky.
The impulsive nature
of change,
the static
radio hush or the ebb and
flow of ocean waves,
the clumsiness of
cicadas or rattling leaves.

We were dreaming
Or lost,
when the hours swan by and
days felt no different.

“I left my words on the front step”

I left my words on the front step.

Your kitchen smells of winter,

the bedroom of spring.

Every morning he woke to his ceiling
briefly losing himself in its white heaven,
empty, quiet, comforting.

Like the wrinkles on his face,
the cracks appeared
growing from the corners of the ceiling,
deepening, and creaking in its’ old age
it began to collapse and gave way on top of him.

Eyes shut tight,
returning to life as he inhaled,
he exhaled out of bed.

Tom lived in a fourth story apartment
with a balcony that bathed in sunsets and sun rises.
Most days he stood a distance away from the railing,
there were few days where he had the courage
to stand close or place his hands on it.

When he did,
Like the decaying bones of a corpse
The rail would crumble apart
And he would fall over the edge.

His limbs dislocating,
his heart convulsing,
his body hugging the pavement
As he hit the ground.

He stumbled backwards into his living room
And locked the balcony door.
After breakfast he went to work.

Upon entering his car he would die once more,
A head on collision.
He watched the steering wheel crush his stomach
Watched his windshield shatter
as his whole body rattled within
The pulverized vehicle.

Looking at himself in his rear-view mirror
He starts his engine and continues his day.

No one knew how the unpredictable
fate of mortality haunted him
So much so that living meant
to die a new death every day.
Every night he drank tea before bed
But this night, as he slept,
The gas from his stove crawled about his home,
poisoning his lungs.

When he awoke to white heaven,
it didn’t creek or crack.
But simply remained blissful.

This valley is blanketed In layers of green:

And lilac too – bursts of hydrangea.

I shifted over to the boulder,

The one with a bump for neck support,

The one where had often sat shoulder to shoulder.

There were kisses and fairy tales,

Mudpies, face paint – and a proposal.

But it’s no longer personal.

Dad & I perk our noses in the air

as we part the orchard’s dark on Grand Avenue

to absorb the scent of the orange blossoms.

Ojai, a place I’ve never been before,

have no reference tab in the black book of metaphors.

as the thick, undulating pleasure

seeps into my chest, hushing my mind

into a dizzy state, drowned with sweetness.

I reach for metaphors;

I settle on closing my eyes.

Four men on horses of treachery!

They spin the wind high and push the sea down low.

You’re awake, He said, at last;

Have you read those voices of the past?

Your last, I said, those words;

Listed on pages and protected by sages…

Who told me those travels were not to be heard?

They tell me it hangs on the crucifix.

Reminder: Please leave your first-draft poetry in comments for a chance to be featured on our blog!

Finding normality within Bipolarity. The inner musings of a chemically challenged manic-depressive. Mildly* asocial and a purveyor of awesome.

Lady or Not
Andra Watkins

St. John One: One

my name is hannah and i write about things sometimes

Calling all conversations!! What say you?

http://compellingpeople.com
What Inspires Your Writing?

A blog dedicated to writers...and the people, places, and things that spark their creativity

documenting my journey through life

A Blog About Health, Hiking & Happiness

a weekend of writing, community, and inspiration

Adventures and Studies in Mexico 2011